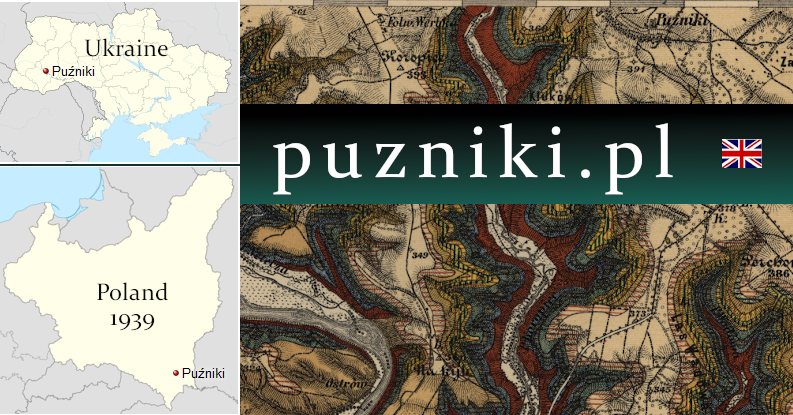 We are a group of people tied to a no longer existent village in Podolia located  between Buchach and Koropiec. Puzniki.pl website was created to commemorate the place where our roots lie.

The village was established in ca. 1775 and, initially, it was a part of Barysz – a town owned by Potocki and then Szawłowski families. From the very beginning it was inhabited mostly by Polish Roman – Catholics. The majority of them were petty noblemen coming from a neighbouring, a few decades older village – Nowosiółka Koropiecka. Their noble origins have been recorded in the church birth registers,  where the status “nobilis” (“noble”) was written down next to the surnames.

It may be estimated that ca. 1820 in the village there were no more than 50 houses and roughly 350  inhabitants.

In 1831, the village was hit by a great, first-ever cholera epidemic, which was decimating Europe.

Thanks to Artur Zaremba Cielecki and priest Karol Zoeller, in 1904 Puźniki became a separate Roman – Catholic parish dedicated to St. Anthony of Padua.

After pr. Zoeller’s death, the parish of Puźniki was handed over to Saletinian priests, who had just come from France. The first parson appointed from among them was pr. Gabriel Vanroth and after his departure to USA in 1908, Eugeniusz Picard took his place. The Saletinians  were granted a permission to build a seminary in Puźniki, which functioned  from 1906 to 1911 in the extended building of the vicarage. The parish did not only encompass Puźniki, but also the Roman – Catholic population living in the neighbouring Weleśniów and Zalesie villages.

The global development of the railways opened Puźniki to the world. Railway stations that were just a few kilometers away down in Korościatyń and Jezierzany enabled communication with bigger cities, such as Stanisławów , Lwów (Lviv), and (from there) with Europe. Between 1902-1914 we could observe a trend among the inhabitants of Puźniki toward moving to America for financial reasons.

After years of stagnancy, the village started to develop rapidly.

In the summer of 1914 the WW1 broke out. The locals who were drafted into the Austrian army  fought mostly at the Russian and the Italian front.

After the turmoil of the war lasting 6 years, Puźniki  slowly  began to recover. The losses caused by the WW1 and the two epidemics – typhus in 1917 and the Spanish flu in 1919, resulted in significant population losses. Mortality was so high that only as late as in 1929 the population has risen back to the level from the  beginning of the XX century, partly thanks to the military settlers from Cracovian region who received large  parcels of agricultural land from the government as a reward  for their participation in the Polish-Bolshevik war in 1919-1921.

Thanks to pr. Chmielewski’s activities, a number of Christian-related  organizations  emerged in Puźniki. They were dedicated  not only to the religious life in the village, but also the cultural one. There were the Catholic Youth Association, the Stefczyk’s credit union, an orchestra, an amateur theater and a paramilitary organization “Strzelec” (eng. Rifleman).

Shortly before the WW2 the Association of the Farm Nobility was established.

On September 1, 1939, the war with Germany broke out and on September 17, 1939, , the Soviet Union, acting in agreement with Germany, invaded the eastern part of Poland.

In the summer of 1941,  following the German-Soviet war, the Germans entered Puźniki. Over time, Ukrainian nationalists’  actions against Poles were becoming more and more aggresive. The first  UPA’s (Ukrainian Insurrection Army) attempted attack on Puźniki was pushed back in September of 1943.

During the war, a  large unit of the Polish partisan Home Army was stationing in Puźniki under the command of lieutenant Mieczysław Warunek, pseudonym “Janek”. After the Germans’ withdrawal in the summer of 1944, the troops were disarmed by the Soviets. Lieutenant Warunek  was exiled  to Siberia, from  where he hadn’t come back until the middle of the fifties.

At that time the Soviet authorities began the military conscription. Most of the men under the age of 50 had been drafted to the Soviet-controlled Polish military units.

On the night of 13/14 February, 1945, the UPA unit, under the command of Petro Chamczuk, raided the village. During the assault  almost 100 people  were cruelly murdered. The frightened Poles decided to leave Puźniki and move to Buchach or Koropiec.

In June 1945 the remaining inhabitants were forced out of Puźniki  and transported by rail to  so called, „Western Lands” (former German territories given to Poland in result of the Potsdam Agreement)  where they settled down in Niemysłowice, near Prudnik and Ratowice, not far from Wrocław.

The houses that hadn’t been burnt or otherwise destroyed during the raid were later accommodated by the Ukrainians who had been displaced by the Soviets from the eastern Poland. But soon, in 1949,  the Soviet authorities decided to eradicate the village. The buildings were demolished and reduced to a pile of rubble. The name Puźniki was erased from the map.

Nowadays the graves at the graveyard and a small chapel are the only traces of the Polish history in Puźniki.

The village of Puźniki is more than just a place where our ancestors were born and from where they had to flee in tragic circumstances. It is a special place about which we heard countless stories and of which we have always had vivid pictures in our minds. Puźniki became a sort of a legend for us and pushed us to learn more about our roots.

We hope that this website will inspire people from all over the world to learn about their origins as well. We’d also like to share all the information we managed to find.

If you think you have some interesting and possibly useful materials regarding Puźniki, such as photographs or other documents, feel free to contact us.

Puzniki.pl website works under the patronage of the Association of People of Nowosiółka and Puźniki.

Consent for exhumation work in Puzniki

THE CONSENT OF THE CENTRAL UKRAINIAN AUTHORITIES TO BEGIN ARCHAEOLOGICAL AND SEARCH WORK ON THE GRAVE OF THE POLES MURDERED IN PUZNIKI IN FEBRUARY 1945 HAS BEEN OBTAINED.

We would like to thank for this initiative the Freedom and Democracy Foundation, which for several years has been financing the work carried out by the Lodz Scouts of the Polish Scouting and Guiding Association at the cemetery in Puzniki and Novosiolka Koropetska. Our thanks also go to the authorities of the Republic of Poland. President, Prime Minister, Minister of Culture and National Heritage, whose help turned out to be invaluable during our efforts to obtain the needed approval. We also thank the Ukrainian side for their approvals and assistance.

According to the Freedom and Democracy Foundation’s Vice Chairman of the Board, Maciej Dancewicz, to PAP, the road to the start of the work is not yet completely cleared. However, it should be remembered that thanks to the work of the Lodz Scouts of the Polish Scouting Association and the help of locals living in Sadowy (formerly Novosiolka Koropetska), the grounds of the Puznik cemetery are mowed and fenced. So it is possible that the work will begin this year, but let’s also prepare for the work to start in the spring of 2023.

Work related to the graves will be carried out by a licensed Ukrainian company that has an official permission for such activities. The most important thing here, however, is that specialists from Poland will take part in the work.
Finally, we would like to express to the Association of Novosiolchany and Puznikians that we are deeply moved by the whole matter.
When we started our activity 5-6 years ago, we did not expect that such a recognized organization as the Freedom and Democracy Foundation would soon be interested in Puzniki and Novosiolka, that Puzniki would be the subject of talks between the Polish and Ukrainian authorities, and we did not even expect that so many people would be subscribing us on our Facebook profile and accompanying us on our cyclic Novoselchany and Puzniczany reunions.

Puźniki - our roots
a no longer existent village in Podolia located between Buchach and Koropiec.